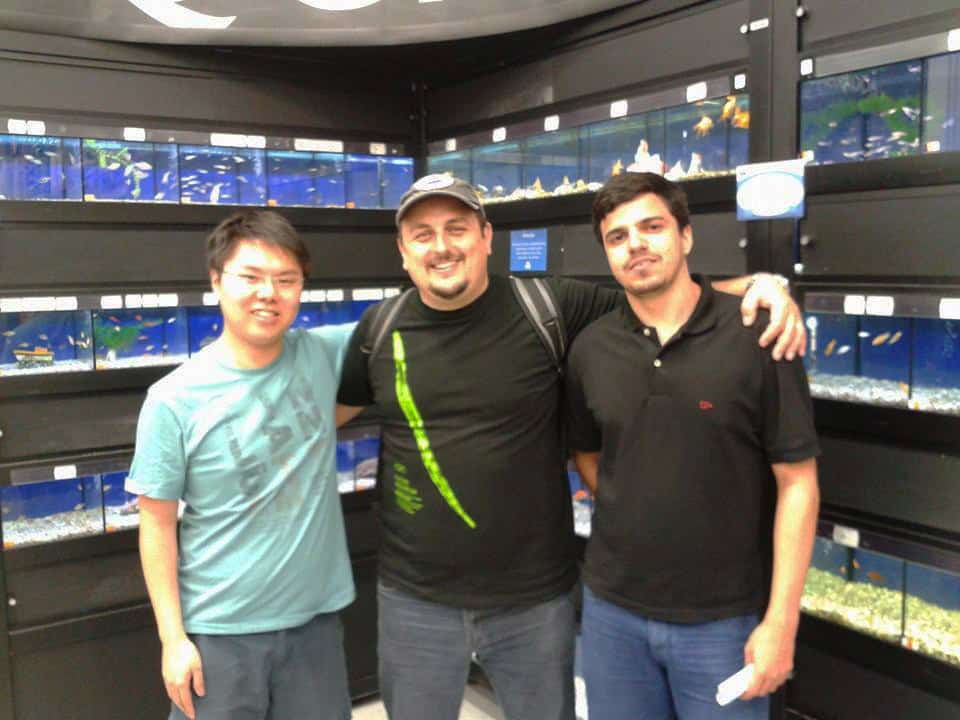 [toggle title=”Interview of the IAPLC winners for Aqua Journal (english)” state=”close”]Thank you for cooperating for the interview for Aqua Journal. Please kindly send us the answers of below questions and requested pictures by the indicated due date. You could reply to this E-mail for your answers and pictures.

Name: Marcelo Tonon Chiovatto
Age: 37 years old
Country: Brazil
Occupation: Software Engineer
Years of experience of aquarium: 30 years. My mother gave me my first aquarium when I was 7.
Number of your own tank and its size: I have 3 tanks at home. This year I have applied for IAPLC using the aquarium from my bedroom. It has 90cm x 43cm x 30cm
Your favorite aquatic plant(s): My favorite aquatic plant is the Riccardia chamedryfolia
Your favorite fish(es): My favorit fish is the Paracheirodon axelrodi
Other hobby besides aquarium: My other hobby besides aquarium are drawing, painting and photography
aquarium shop where you often go: We have several good shops at São Paulo, but I am accustomed to visit Aquário do Brasil Shop and Aquabase Shop.

Please tell us what you have intended to express in this layout; in other words, what are the theme,
motif, inspirational source, and idea behind your work?

I was born and live in São Paulo, a frenetic megalopolis where people have little time to enjoy the beauty of nature. Handle with underwater plants, fishes, rocks, wood… sit myself every night in front of my tank and observe the beauty of life, right before my eyes, brings me back to the roots, I mean, closer to the Nature.

The inspiration for this work came from my visits to three beautiful places in Brazil: Iguaçu Falls (Paraná), Caracol Falls (Rio Grande do Sul) and Itaimbezinho Canyon (Rio Grande do Sul). At Iguaçu Falls I had an indescribable feeling when I was ahead of the hundreds of existing waterfalls and cataracts, pouring the biggest volume of water I have already seen through my eyes. I felt then that would be a pleasurable challenge trying to build a landscape that could represent that wonderful feeling.

Please explain the layout materials such as rocks and driftwoods used in the layout. Did you have any difficulty of making and maintaining this layout?

I believe the creation process in Brazil should be a little different from countries in the Asia or Europe, because the hardscape’s offering here is very scarse. Sometime you have to change something in your original idea, because you can’t find expressive material to do it. So, you have to be really creative and work using what you get. And is not always you find what you were looking for.  To develop this layout I basically have utilized rocks. Facing huge challenges to get the appropriate hardscape, I have borrowed some Seiryu Stones. To develop the central part of this layout I have used some volcanic rocks and ardosia’s rubble. To represent the water flow falling from the waterfalls I have used some acrylic wool and to the water flowing through the “river” I have used ADA’s sand.

Did you have any difficulty of making and maintaining this layout?

Yes. My initial idea was a little bit different from the final result and it happened due to my wishes about to represent it through an innovative perspective. The most part of the time I was trying to do a river flowing to the background part of the aquarium but I have “heard” what the aquarium was telling me and I have inverted the flow. I believe it was the right decision because since this change the layout seemed more harmonious and natural for me.

The maintenance also brought me some challenges because during some time I have faced tough battles with the algaes. Who never felt crazy, believing it was the end for that job?

I can say two things to summarize the learning from the difficulties:

1. Learn to “hear” your layout. Observe the “layout flow” and, if necessary, let the nature guide you sometimes.
2. Don’t give up. If you have a dream, nothing will stop you. Be patient and you will get there!

What do you think about the International Aquatic Plants Layout Contest?

I could say that The International Aquatic Plants Layout Contest is the largest world championship for aquascapers and a world reference, but I think it goes beyond. It became part of our lives. The commotion caused by this global competition is something contagious. Year after year the opportunity to express our feelings through a new layout and participate in IAPLC is an exciting idea.

I think the strong point of this work was set in the central part, where I believe I have achieved a beautiful reproduction of a valley surrounded by waterfalls. Particularly the river that forms part of this layout seems to me one of the most attractive points. I also like the forest located on the right, where I believe I have achieved a good result in the attempt of representing a beautiful wild forest. Globally I also think I got a good panoramic effect.

The point that worried me most in this layout, and I imagined it would deduct points from the analysis made by the jury, is the left part of the layout. I did not get a good solution to the left side and I believe it has become less interesting and less defined.

Do you have any key of winning this contest?

I believe does not exist a key to winning the contest, but there is certainly a key for you to achieve your own goals. Develop your layout with love. Let your intuition guide you. Enjoy nature and observe the balance in everything she creates. Try to convey this sense of balance to your creation and I think you will be certainly on the right track.

How is the aquarium in your country?

The aquarium in our country is something quite popular. Our geography is rich in hydrographic basins and species of fish and plants. Both children of the countryside as the children from the major urban centers have contact with fishes and aquariums. But the aquascaping is something new. Even today many individuals are surprised when they discover that there is so much varieties of aquatic plants and are even more surprised at seeing the wonderful layouts made by natural aquascapers. I believe that this achievement, among other major awards won by Brazilian aquascapers, certainly makes this aquarism segment better known in our country.

Please tell us about a layout you would like to challenge in the future and your dreams.

I do like the forests and I think about developing my new layout representing some of the wonderful kinds of forests we have around the world.

What are your recommended ADA product(s)? And why?

I had the opportunity of buying a wonderful scissor and a friend of mine gave me another. They are amazing. When I started doing aquascaping I did not knew why I should have a special scissor, but it became clear for me when I started to better understand that my ideas only could be reproduced if I had precision. The difference lives in the details.

I also had the opportunity of mount my aquarium using the ADA substrate system. Besides the beautiful shape and color, it has an impressive capacity of providing the necessary elements to fast and luxurious plant growing. It is stable and easy to plant.

Thank you very much for your cooperation!
AQUA DESIGN AMANO CO., LTD. [/toggle] 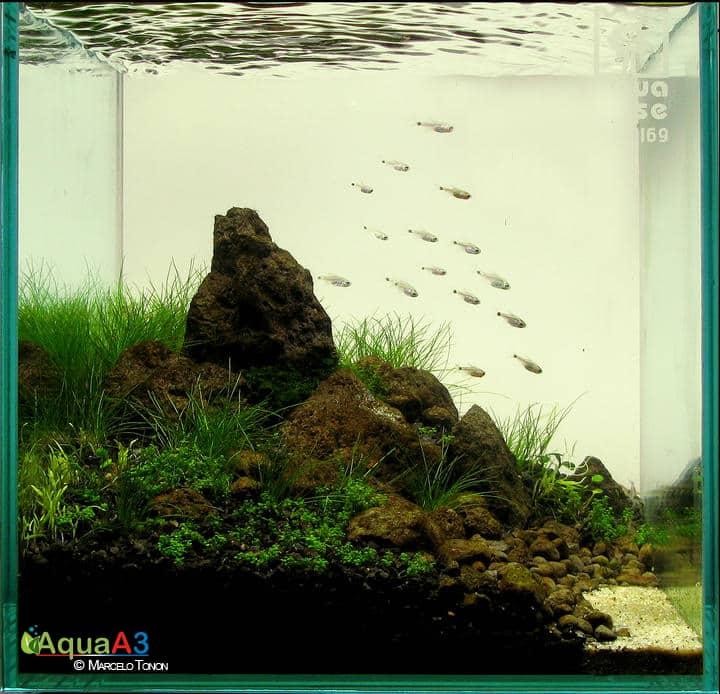 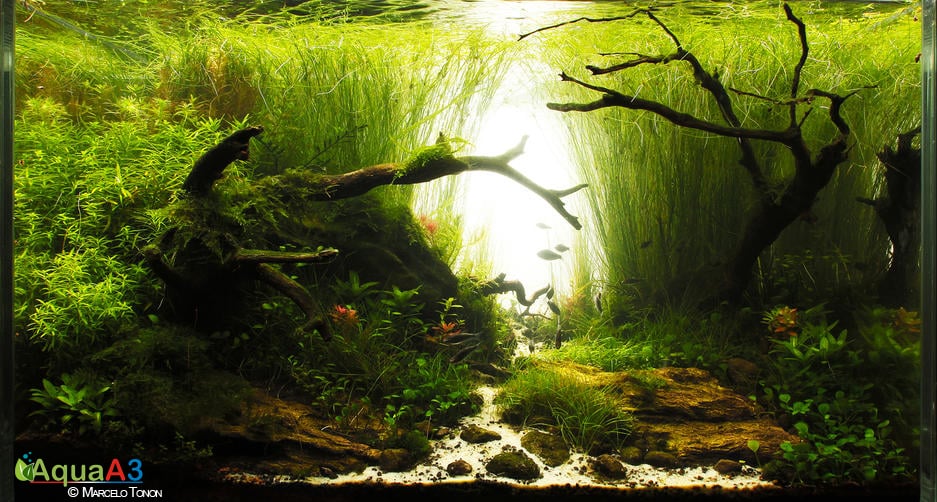 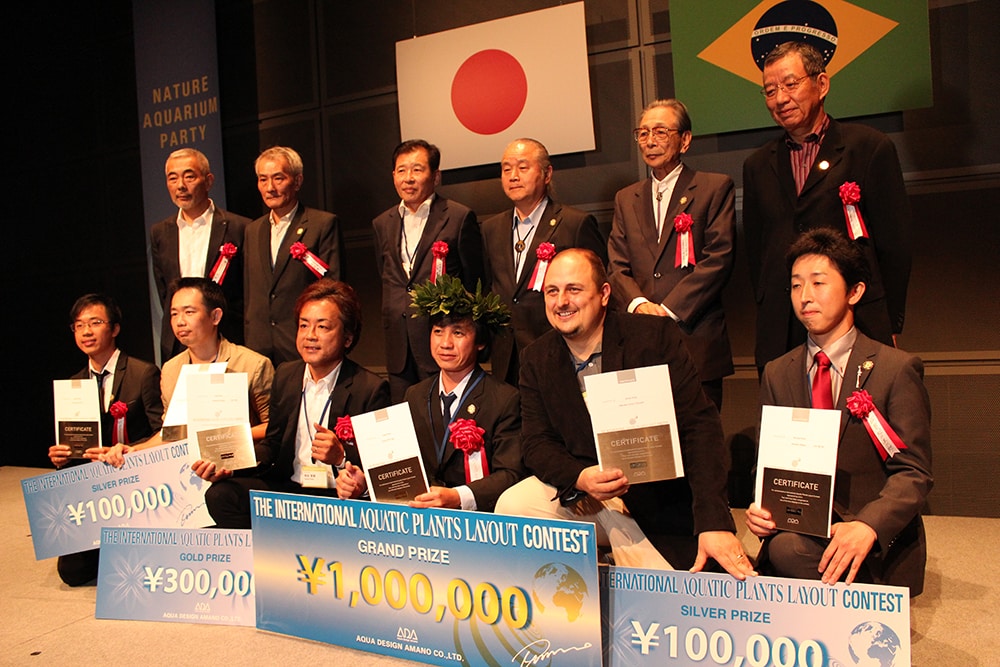 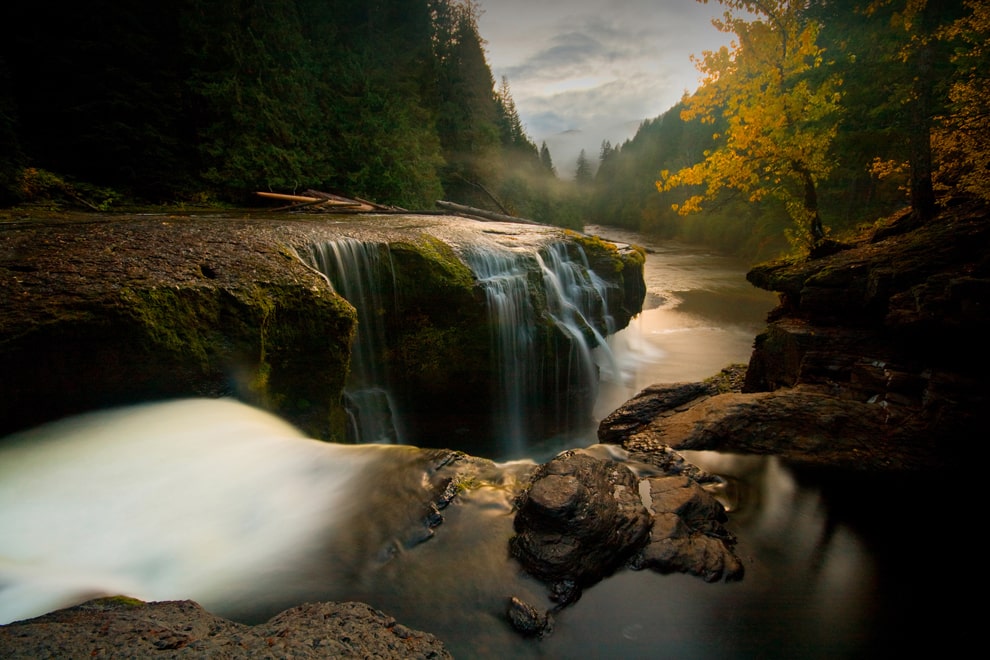 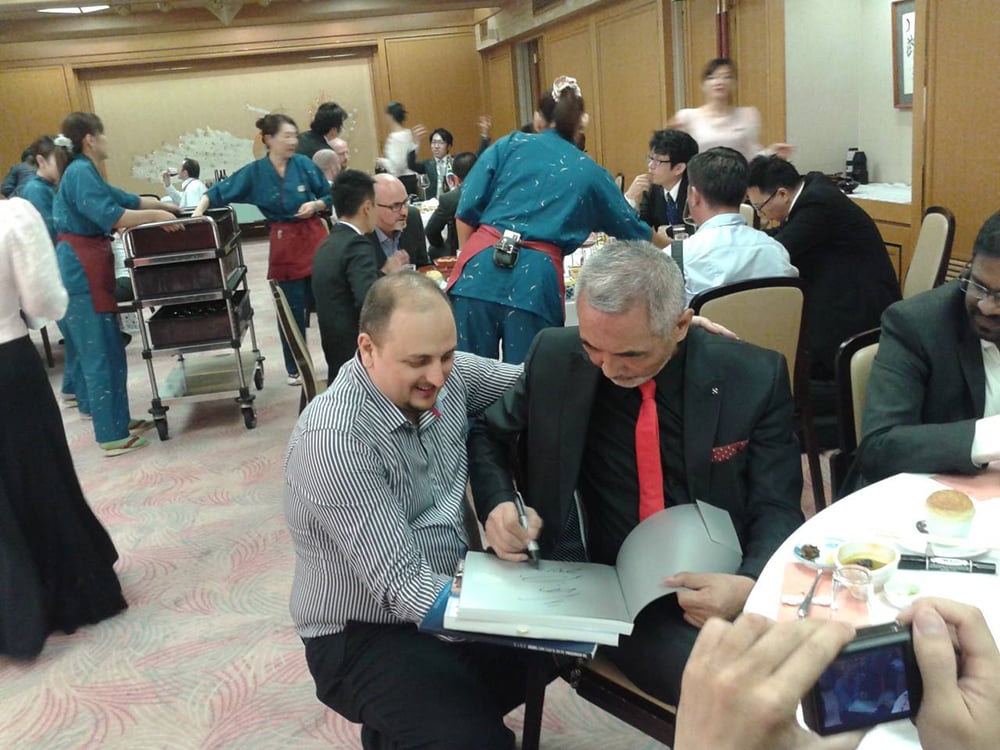 Manutenção do Sunrise in the Valley 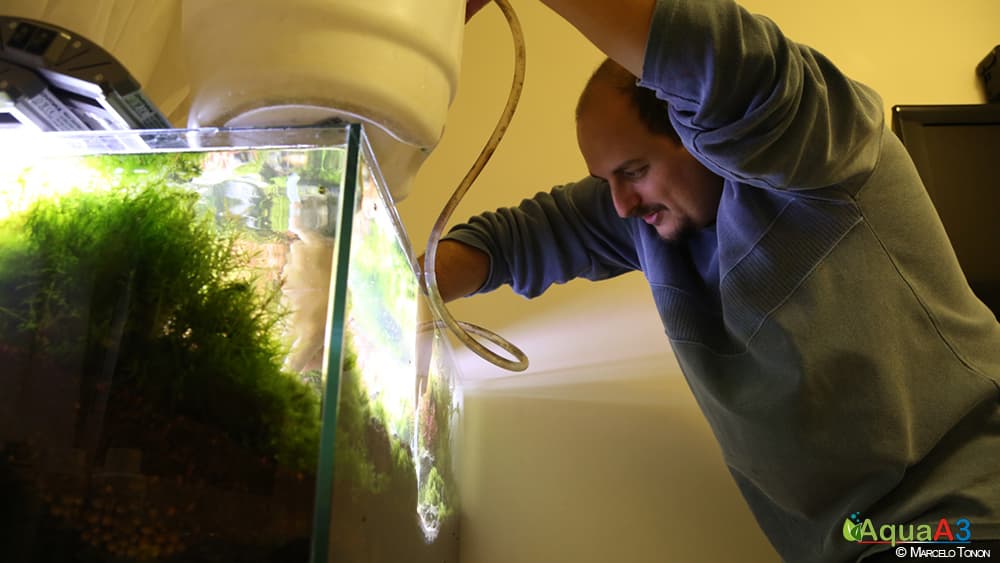 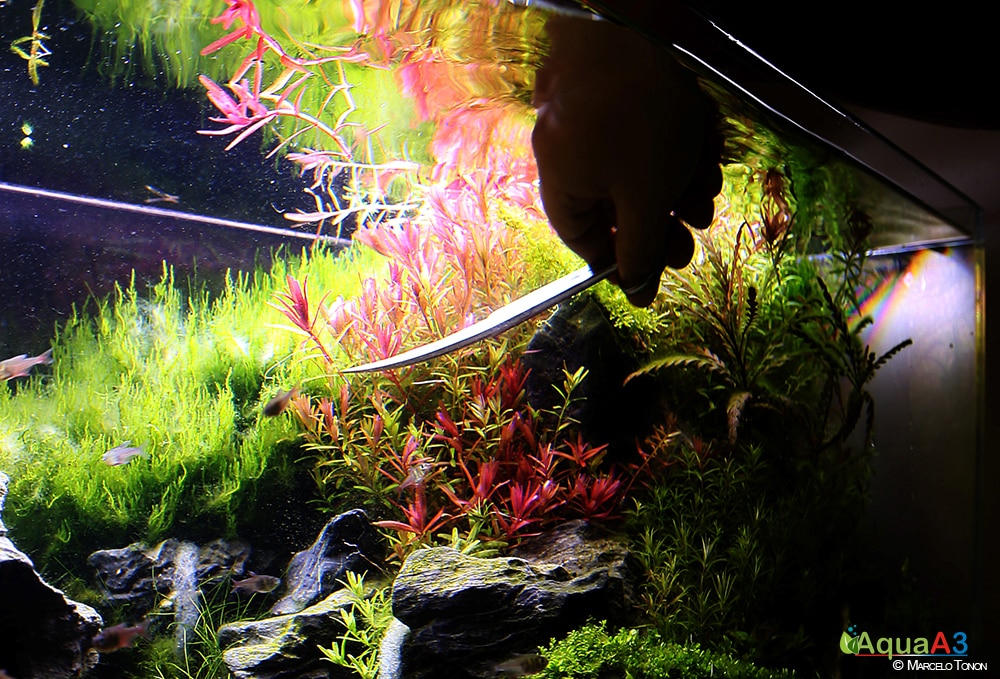